This is an intriguing and thought-provoking true story, so much so that some have doubted its veracity. Indeed at some points it beggars belief but the whole thing rings true to me. It is written by a modern, free-spirited and educated young woman who was brought up conventionally but who was never going to fit into the pattern expected by her family and friends.

She is plenty old and worldly wise enough to know her own mind as her life changes entirely. Prior to a bikers’ convention at Sturgis, South Dakota she reads a book (Lakota Woman) by Mary Crow Dog of the dispossessed and impoverished Lakota Indian people. She persuades her biker boyfriend to detour to their reservation at Pine Ridge, wanting to learn more to take back to supplement her college work. 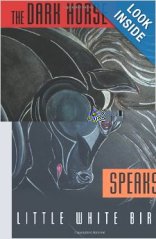 In 1890 the remnants of Custer’s 7th Cavalry murdered hundreds of Lakota people, including women and children, burying the bodies in a mass grave. Little White Bird (LWB, we never get to know her birth name) visits the reservation and the mass grave. There she has her epiphany, and describes it with some powerful writing.

I heard the Ancestors from the 1890 Massacre calling to me. Their dead voices became alive, rising from the ground, screaming from the sky and earth, their whirling swirled around me, creating the wind… Everything inside my body and mind, heart and spirit, was swept away. Like the sirens singing to the Greek mythological warriors, luring them to their deaths as their sweet, hypnotic voices made their boats crash upon the rocks, the Ancestors called to me.

LWB’s boat crashed upon the rocks. She is mesmerised by the Lakota nation and Chief Two Bear Paws. And it’s at this point, when she agrees to live with him on the reservation as his wife that the real story begins.

It’s a riveting description of real life on the Pine Ridge reservation. But it will horrify most modern women. There is nothing heroic about the modern Lakota people. The men have lost their hunting, the women their tipis, they have no identity only their traditions. In their poverty they are as materialistic as the rest of modern America.

The Chief treats LWB cruelly, as a chattel, with no hint of affection. And what is remarkable is that she continues to love him, accepting the hardships, determined to help put right the wrongs done by the White Man. 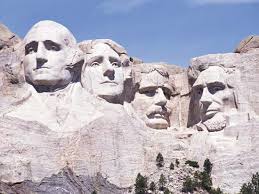 Mount Rushmore, part of the Black Hills stolen from the Lakota

She tries to leave him more than once. He brutally assaults her. She finally leaves for good…no! She comes back again, unbelievably.

There are so many truths told here. The Indians despise the White Man and no show of remorse or reparation will change that. Those that see the Indians as ‘noble’ will need to think again. And on another level it is worrying how much abuse and disdain a woman can take and keep coming back for more.

A remarkable book, one you should read and draw your own conclusions.