Any Time Team fans about? For the uninitiated, Time Team was a British television series which started in 1994 and ran for 20 years. Basically it broke the mould of stuffy academic archaeology by potting digs done over just three days (rather than months, which was typical) into 45 minutes for television purposes.

The team of colourful experts was fronted by ‘Everyman’ Tony Robinson who attempted to summarise what was happening in layman’s terms. Each week they’d descend on a place or site of interest. Clearly there was a fair bit of research done beforehand so that the team could crack on straightaway with the dig. Usually, before the first day was out the first trench had been opened and the trowels were at work and tentative interpretations suggested.

The early episodes are presently available to view, so I’ve been sitting down and watching them in the evenings. What struck me straight away was the technology, or lack of it, in the 1990s. OK, the word ‘geophysics’ was a new word to most then, with the ‘geophys’ people marching up and down fields with their equipment, measuring differences in resistance below ground. Mighty impressive, but the output was delivered by clunky printers and first generation CAD. Cutting edge for the time but I’m looking forward to see how geophysics advanced over the 20 years.

In one of the first episodes, one of the experts explained to Robinson on-screen a new technology called Global Positioning System – GPS. ‘So,’ said Robinson, ‘you mean you send a signal to a satellite up there (he points to the sky), the satellite sends a signal back and tells you where you are?’ These days we all use GPS as standard in one form or another.

And no Internet! The archivist checking the history of the site would triumphantly wave a dusty book containing vital background. To be fair, much of these old academic records, maps etc. are probably still not digitised, but today our first port of call is Google or a specialist website.

During its time, Time Team did huge amounts to advance archaeological research. It inevitably put noses out of joint in academic quarters but it stimulated the whole profession. And its time-limited format showed what was possible when it came to involvement with major building developments which were halted for investigation of lost historical features. 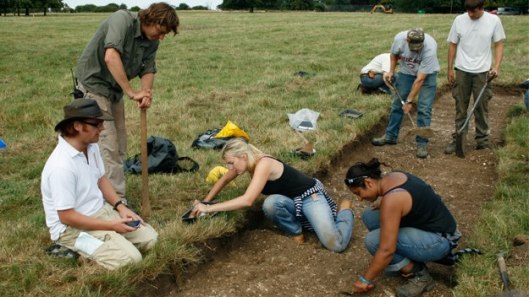 Long live Time Team. You can find the re-runs on http://www.channel4.com