This side of the Atlantic we don’t know much about baseball. There are pockets of interest and indeed there are a number of clubs making up the British Baseball Federation, and a league structure. At European level the Netherlands are the strongest nation.
At school the girls used to play rounders (maybe they still do) and softball goes through high and low spells, but is generally thought of as a social sport.
But Major League Baseball in North America is the stronghold. It is the quintessential American game, its history intertwined with that of its country. Even us Brits can reel off its legends – Joe diMaggio, Babe Ruth, Mickey Mantle, Jackie Robinson, Joe Jackson (‘Say it ain’t so’). 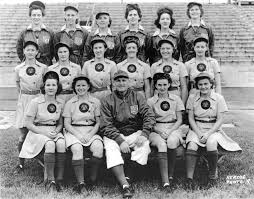 And women play, *gasp*, always have done. Whatever next? As in most sports the women’s game has never commanded the attention that the men get. Its high point was reached in 1943 and the years afterwards by the formation of the All-American Girls’ Professional Baseball League. This was at the height of American participation in WWII which left a vacuum to be filled.

My fellow writer Britt Skrabanek has captured those heady days in her captivating novel Nola Fran Evie. She portrays three of the gum-chewing women with attitude that made the grade and some money before drifting back into civilian life. Thereafter they team up again in 1950’s Chicago – they’re changing and so is the world.
One passage that has stayed with me – Fran realises that the man she loves is rejecting her – their forbidden love can’t last.

She dropped her hand from Roland’s face and hugged her knees to her chest. She sobbed quietly, her head bowed, suffocated by grief the likes of which she’d never known.
‘I must be off my rocker here,’ Roland said finally.
She picked her head up. ‘Huh?’
‘It means I must be out of my mind. ‘Cause baby you’re right,’ he said, holding her knees. ‘Damn the rest of it.’
Immense relief flooded Fran’s body. Their lips joined together for the first time in truth. They recognized their love would continue being difficult, that they would endure battles other couples could never imagine. But their love was iron clad, the kind that could handle that kind of thing. So Fran and Roland didn’t surrender. They chose to show the world that not only was their love something to tolerate, it was something to be revered.

Get Britt’s book, now in paperback as well as e-book, here or at your national Amazon store.

7 thoughts on “Women in baseball, and beyond”