The Special Operations Executive (SOE) was set up in 1940 by the Ministry of Defence. Its purpose was simple – to conduct espionage, sabotage and reconnaissance in Occupied Europe. Of necessity, it was a shadowy organisation.

But, after the War, tales emerged of the heroic deeds of those involved. And many of them were women. Here are the brief stories of two of them.

VIRGINIA HALL, the ‘Limping Spy’, was probably the most famous of the SOE women. Born in Baltimore, Maryland, Hall was aged 34 at the outbreak of war. A gifted student, she followed up her US college life by continuing her studies in Europe. She became fluent in the French, Italian and German languages whilst obtaining a diploma in economics and international law.

Following a shooting accident in 1932 her left leg was amputated below the knee. Thereafter she wore a wooden leg. Thus thwarted in her diplomatic career ambition, after the outbreak of war in 1940 she worked as an ambulance driver in Paris, but was forced to retreat before the advancing Nazis. She was quickly recruited by the SOE. Re-entering France under the guise of an American news reporter. She quickly established a secret network of resistance workers whilst training other SOE recruits.

With the Germans determined to capture the Limping Spy, she escaped to Spain. Soon after she joined the American Office of Strategic Services (OSS) and returned to France and once again began to create difficulties for the occupying forces with numerous acts of sabotage by herself and her team.

Returning home after the War, Hall was awarded highest honours by France, Britain and the United States. She continued to work as a CIA analyst until her retirement.
Hall died in 1982 in her home state and is buried at Pikesville.

My long-time blogger friend Britt Skrabanek took this theme of female spy and created Alina who awakes to find herself under cover, in wartime Berlin, and in the bed of a high-ranking Nazi. She soon learns that she has been in Berlin for three years and is on a dangerous mission. Certainly a neat way of skipping lots of back story!

‘Correct me if I’m wrong, but aren’t you supposed to be here on a clandestine op for the United States War Department?’ He pounded his fist on the wall and began pacing again. ‘I realize three years leading a double life as a spying lounge singer must be taking its toll on you. I understand you’re working against your own country, risking your life for another. Hell, you’ve been here longer than anybody else we’ve got, delivering intelligence that’s saved countless lives.’

Britt uses Alina, and the backdrop of wartime Berlin to craft a great story. But there comes the time she needs to do her night job – and the lounge singer nearly blows her cover, she can’t do the songs.

‘Is it me or is it hot in here?’ Alina touched the microphone, winking at the audience. The crowd whooped and whistled. ‘Why don’t we see if we can heat things up a little more? Welcome to Café Rouge, babies.’ She stuck out her hip, slapped her thighs, ran her hands up the side of her body, then reached her arms high overhead to show off her red, satin gloves.
More applause erupted and the band struck up.
Alina didn’t recognise the melody. Her arms floated down, slow and unsure. 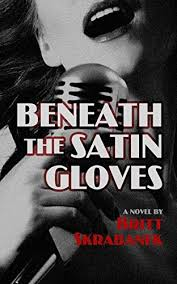 See how Alina gets out of the fix by getting her book Beneath the Satin Gloves – shortly to be available in paperback as well as e-book – here or here.

VIOLETTE SZABO (née Bushell) was born in Paris in 1921 to an English father and French mother. After her parents moved to London, Violette and her younger brother lived with their aunt in France until they were reunited with their parents in London when Violette was 11. From age 14 Violette worked in shops and stores in both London and Paris.

After the outbreak of war Violette worked as a Land Girl. She met a French officer, Etienne Szabo, and they were quickly wed. She gave birth to a daughter, Tania*, but her father never saw her, being killed in action. Spurred on to gain a measure of revenge, Violette Szabo was soon accepted into the SOE 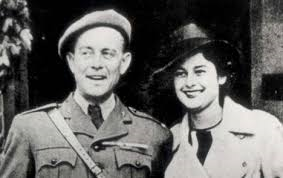 The tales of her exploits and courage behind enemy lines in France are legendary, but her story was not to end well. She was captured, interrogated and tortured. Szabo was taken to Ravensbruck in August 1944. By every account she continued to resist ill-treatment and interrogation, and was a tower of strength for her fellow prisoners.
On or before 5th February 1945 Szabo was taken to ‘Execution Alley’ at Ravensbruck, made to kneel and was shot in the back of the head. She was just 23.

*Tania lived and worked in Jersey for many years. She now lives in Wales.