On the Channel Islands’ 72nd Liberation Day, here is a reblog of a post from six years ago.

Back On The Rock 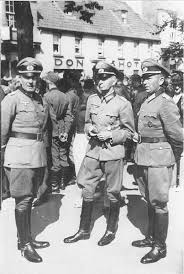 anniversary. They pushed the boat out that year. I attended the Grand Pageant at Fort Regent with my seven year-old son Eoin. It was a fabulous show depicting the capture of the Island, the Occupation and finally the joy of Liberation. It was a one-off…