In my second novel ‘A Jersey Midsummer Tale’ the early scenes were of four young Jersey people meeting up on Midsummer Day 1935. Soon enough one of them – Tess Picot – was trying to tell me, convince me, to write her story. And so I did in ‘Tess of Portelet Manor’.

In ‘A West Cork Mystery’ a young, feisty barmaid in Darwin, Australia makes a brief appearance to help out one of the story’s leading characters. Later, Chantilly Taylor reappeared as the subject of a short story in my collection ‘Aspirations of a Sheep’.

Which leads me to the point of this post. Chantilly won’t let me go. I have explored her character, personality and appearance. She is pale, ash-blonde cut in a severe style, blue-eyed, straight-talking, gay or a-sexual, likes Goth music. But she is highly intelligent and, despite her background, has always wanted to study History at one of the Oxbridge colleges. Due to some good fortune she has managed to get a place at Magdalene, Cambridge. 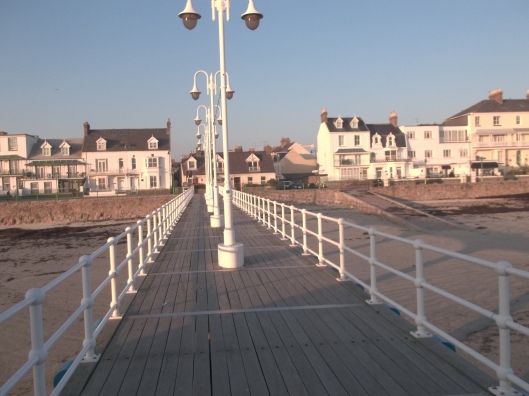 Nothing to do with this post, but a nice view of Havre des Pas, Jersey from the old swimming pool.

Never having been to Cambridge I have researched the city, and Magdalene, in some depth. And I have written the first couple of introductory scenes. And I have no clue what comes next! I haven’t a plot, though I want it to be crime-based.

Which got me to thinking about the popular authors who have readers gasping for their next release. Lee Childe must always be thinking up new adventures for Jack Reacher. Tess Gerritson and her protagonist Jane Rizzoli, Rowling and Harry Potter, Arthur Conan Doyle’s Sherlock Holmes. There are innumerable examples. What is their process for thinking up a new overarching plot?

It’s a new one on me but I’m going to have fun figuring it out. Meanwhile Chantilly is getting used to her new life as a fresher in Cambridge.

30 thoughts on “A character looking for a story”