I’ve recently been inspired, by a couple of excellent blogs, to write down for the record a little of my ancestry. Those inspirational blogs are

I commend both to you. They are quite different but both have a true feel for Irish history, including that of their own families.

You should also visit Kerry Duncan’s blog ‘Postcards from Kerry’. Kerry has recently been looking at some work done on her ancestry and she has uncovered some great secrets.

There is so much social history that is lost and whatever we can preserve will make research that much easier for those that come after us.

So I’m going to work backwards and we’ll see how we get on. But the story starts with the next generation and my children Eoin (b.1987) and Emma (b.1989). Eoin is a qualified doctor working in Newcastle-upon-Tyne and Emma works for the States, the government here in Jersey, Channel Islands. 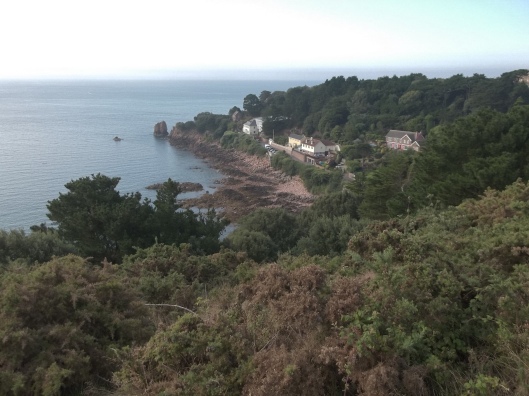 Here is a recent view, one of my favourites, of the Beauport headland here in Jersey

We were all born and raised in Birmingham to Donal and Joan. Dad died some years ago but Mam is still, at 86, buzzing around in the old homestead. Both came over to Ireland in the late 1940s – like so many of their compatriots – and, after living and working in Blackburn, found their way down to Birmingham where they settled.

Some old photos to follow, but here’s one to be going on with. It will have been taken about 1956 in Dunmanway, West Cork. The grown-ups are my Uncle Jimmy, Grandma Ellen, Aunt Nuala and Grandpa Flor. The little girls are my cousins Ann and Mary. Only Ann is still alive.

In part 2 I’ll explore my antecedents on my Dad’s side.