A line that’s often trotted out by our local media, when it comes to sport, is that ‘Jersey punches above its weight’. Our smaller neighbours Guernsey similarly big-up their sporting achievements.

It’s all to do with keeping spirits high and giving encouragement to those sportsmen and women striving to excel on stages rather higher than those at home. And it’s all worthy, tub-thumping stuff for a local audience, but is it true that we’re above average?

Right now it’s difficult to be sceptical here in Jersey as we see three separate sports operating – and not in a flash-in-the-pan way, at a rarefied and unprecedented level.

Rugby
Up to 20 years ago Jersey RFC was your typical hard-drinking hard-playing club side. The quality varied but Jersey was always a popular destination for touring sides. The game really had no profile outside of the rugby community.
With the advent of a league structure the days of the ‘friendly’ were numbered. To get regular fixtures the club needed to join the league pyramid. Since that time, through both serious sponsorship and private investment, together with enlightened management, Jersey RFC have marched upwards. Three years ago they reached the second tier of English rugby and, in 2014/15, finished as 19th highest club in the English pyramid with no fears at the prospect of challenging in the future for a place in the top echelon.

Cricket
In 2005 Jersey broke away from the English system to join the International Cricket Council, thereby becoming a cricket ‘nation’ in its own right. (Guernsey did likewise.) With the appointment of a series of professional coaches the standard has risen sharply and the young guns have taken centre stage. The team has since competed in the minor European and world leagues, visiting some exciting places and playing host to many small nation teams from around the world.
After intermittent success their great moment came recently when, on their home pitches, they won the round-robin European Division 1 T20 tournament. This means that they will compete later this year with 14 other nations hoping to become one of six to take part in the T20 World Cup alongside England, Australia etc. next year. The game here is now light years ahead of the one I used to play (badly). 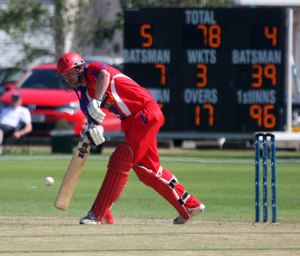 Netball
Until fairly recently netball was a keenly-fought domestic affair, often in the rain at FB Fields or Les Quennevais. Then, seemingly from nowhere, a tight and talented group has emerged with the help of good indoor facilities, excellent organisation and terrific coaching by a local lady Linda Andrews who has grown alongside the players. Team Jets, like the rugby guys, suddenly find themselves in the second tier of the English league structure for next season, a remarkable achievement.

And the rest?
Jersey has been amazingly fortunate to have had a supportive government department which has provided top facilities and financial support over the years. For most sports this has meant that they have been able to offer good programmes to youngsters and, vitally, assistance in travelling to the UK and further afield.

But not all sports have risen to such giddy heights. For example football (soccer) has become the forgotten sport at senior level with few bothering to watch league fixtures these days compared with years ago. However their junior programme is reportedly first-class. My sport, athletics, had the opportunity in the mid-2000s to press on to greater things but it has since settled down again to being a good junior set-up with a sprinkling of good seniors, including Britain’s #1 shot putter Zane Duquemin. Basketball, volleyball, tennis, squash, cycling, triathlon, swimming etc. All active and well-run and they have their moments in the sun but are destined to remain mainly domestic sports.

I haven’t forgotten bowls and shooting. Jersey regularly holds its own on the national, European and even world stage and fair play to those boys and gals. But I don’t regard them as in the same category of ‘physical’ sports, though they may argue.

28 thoughts on “The state of Jersey sport”