After five years under the jackboot – and at times it must have felt much longer – the end came in something of a rush. Liberation Day was to come on the 9th but from the beginning of May there was acceptance among the remaining, dispirited Germans that it was over. Now at least they could go home. So they thought. For most there were still many months ahead before they could return to their homeland.

And among the population of the Channel Islands there was at last a spring in the step. At first the defiance was cautious but the news filtering through from London and Europe left no doubt. Union flags, musical instruments, radios, even alcohol appeared from nowhere. After so much false hope, especially after the D-Day landings 11 months earlier, this was the real thing.

On 8th May a crowd gathered in Jersey’s Royal Square. Britain’s legendary wartime Prime Minister Winston Churchill was due to speak at 3 o’clock. Loudspeakers had been installed and the equally legendary Bailiff of Jersey Alexander Coutanche was present together with his wartime administration team. At last Churchill spoke these oft-quoted words:

‘Hostilities will end officially at one minute after midnight tonight, but in the interests of saving lives the “Cease fire” began yesterday to be sounded all along the front, and our dear Channel Islands are also to be freed today.’ 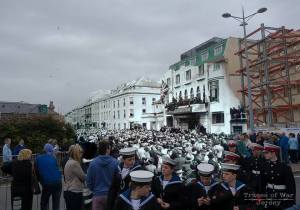 a ‘crossover’ photo of the original flag raising from the excellent website https://www.facebook.com/tracesofwar

The following day the liberating British Force 135 oversaw the surrender and, memorably, the Union flag was hoisted at the Harbourmaster’s Office and nearby Pomme d’Or Hotel to unrestrained scenes of joy.

Seventy years later it seems that the occasion burns stronger than ever in the memory of those, now few in number, who lived through Occupation and Liberation.  There was a near revolt this year when the flag re-enactment was to be sidelined in favour of a much bigger bash up the road at the People’s Park. The Bailiff’s office did a smart U-turn and put things right. All will go ahead as generally expected with the now-expected rendition of Beautiful Jersey by local lass Sadie Rennard. Festivities will continue throughout the day with a mega fireworks display in the evening.

After 70 years it might be that Liberation Day might slowly fade away, along with the old folk. But I thought that after the 50th. I doubt I’ll be around for the 100th but I’m guessing the celebrations will be fiercer than ever.