I am delighted to welcome the talented Andrea Stephenson to Back on the Rock. Those of you that know her blog Harvesting Hecate will already know her evocative writing inspired by nature and the world about us, not to mention her expert photography.

Newcastle upon Tyne is in the north-east of England. A little to the east is the port town of North Shields. This is Andrea’s home town and her inspiration. Be sure to pop over to Andrea’s blog and treat yourself by following it.

Click on the pics to enlarge and get the great detail

I was a little nervous when Roy asked me to write what is my first guest post on his blog.  But when I thought about some of the wonderful pieces he writes on the area he calls home, I knew that the area in which I live could provide some interesting stories of its own.

My stories usually begin with a location and it’s easy to be inspired by the landscape in which I live.  Nestled on the north bank of the Tyne, my town began as a cluster of fishermen’s shacks.  Those shacks are long gone, replaced first by slums and now by fancy apartments.

I can’t see the river from my house, but I can hear it: the hum of the fog horn, the honk of ships’ horns as they leave.  Walk to the end of my road and often, you’ll see a ship passing, as though floating across the end of the street.  I don’t have far to travel to seek inspiration for my writing.  A few minutes away is the marina. 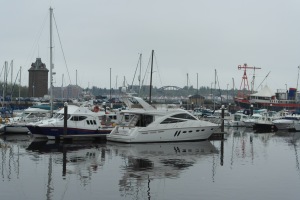 Once, this area was dockland, where coal was exported and timber imported.  Now, it is filled with expensive motorboats and yachts.  Its sounds are the clicking of sails, the shiver of flag poles and, in summer, the squeal of arctic terns.  Just beyond the marina is the international port, where holiday ships sail for Amsterdam and working ships come and go.  One of my characters keeps a boat on this marina.

Walk further east, along the banks of the river and you’ll reach the fish quay. 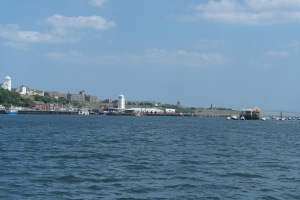 It began in 1225, when the prior of the monastery built those same fishermen’s shacks, originally to serve the priory.  They were known as ‘shiels’ and gave the town, North Shields, its name.  But the city of Newcastle, further up river, was a jealous neighbour and made it impossible for much in the way of trade to happen here for centuries. Still, the town spread, from the river, up the banks.  14,000 tonnes of fish a year landed here in the 1870s, when the present fish quay was built.  Only a fraction of this is now caught, though this is still England’s most important prawn port. One of my characters takes a morning run here in spring and summer.  Another came to a tragic end in the river.

Past the old lighthouses, the High Light and Low Light, that once guided ships into the Tyne, before the piers that took more than 50 years to build were finished.  Walk along the promenade and you’ll see the Black Middens, the treacherous rocks that wrecked many ships.

Walk up the steep bank to Collingwood’s monument.  Lord Collingwood’s flagship, the Royal Sovereign fired the first shot at the battle of Trafalgar and he took over as Nelson lay dying.  Born in Newcastle in 1748 he never returned north after Trafalgar, but now his petrified figure will stay here forever, gazing out to sea.  The cannons on the monument are from the Royal Sovereign.

Climb another steep bank and you’ll reach Tynemouth Priory, an evocative ruin that dominates the valerian-choked headland.  The priory was sacked by Vikings repeatedly during the 9th Century until it was finally destroyed in 875.  A monastery was re-established in 1085 with a colony of Benedictine monks. Three kings were buried here: King Oswin, murdered in 651, who became St Oswin; King Osred of Northumbria, murdered in 792 and Malcolm III of Scotland, killed during an invasion of England in 1093.  There are many stories to be told from among these ruins. 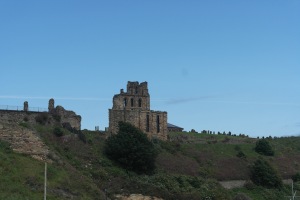 Many lives have been lived along this stretch of coast.  Many stories have been played out here.  But spend just a little time here and you’ll realise it contains the inspiration for so many more.

Thanks Roy for letting me share a little of the landscape and history of my home.