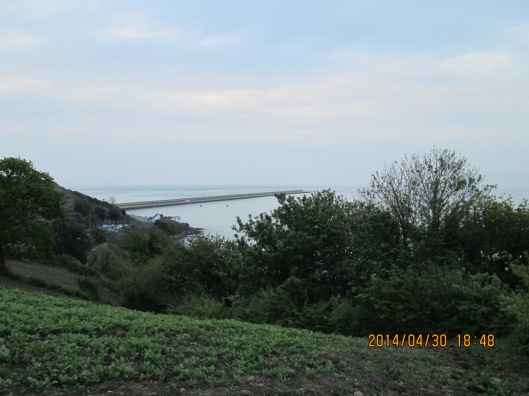 What a brilliant harbour Jersey nearly had! When the pesky French established a naval presence at nearby Cherbourg the British Government commissioned a harbour of refuge at St Catherine on the north-eastern tip of Jersey.

A huge effort was made. From 1847 up to a thousand workers – many of them Irish – caused chaos in the locality for a few short years while the northern arm of the harbour was constructed. Then suddenly the British and French made friends, steam was overtaking sail making the raison d’etre of the harbour redundant. The thing was silting up in any case. The works were abandoned, the southern arm of the harbour barely started.

The Brits tried to sell the breakwater to Jersey who refused, but later accepted it as a gift 🙂

This pic was taken the other evening from the heights of St Martin during a Jersey Joggers run.