Francis Geunette did it again. It isn’t easy to emulate an impressive debut novel, but Guenette manages it very well simply by building on the same formula.

It is certainly advisable to have read Disappearing In Plain Sight as the residents of Crater Lake are reintroduced to the reader several months on. The often-complex relationships between the characters are the strength of these stories, and in one or two cases these have moved on. Izzy and Liam are now a firm item whereas the intriguing Beulah/Bethany relationship is showing signs of fracture.

We were left wondering what would become of young Lisa-Marie. We soon find out as she rocks up again at the remote Crater Lake location pregnant with Liam’s child. Well, I’ve never known the arrival of a baby have such a huge knock-on effect on a community. Major drama which involves Lisa-Marie’s aunt Bethany, Liam of course, Lisa’s sort-of boyfriend Justin plus the consequent waves that occur. Readers from large families might have cause to smile. 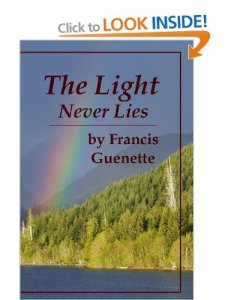 Micah Camp, a residential refuge for disturbed young people, is an ideal device for introducing new characters. But, crucially to the story, Liam’s father turns up out of the blue with a young lad Robbie who steals the show.

Without any real plot or perceived endgame this story might have drifted. But Guenette has a great knack of giving each of her characters distinct personalities. Her storyboard technique maps the relationships and complex sub-relationships so that the reader is engaged throughout. The pages keep turning, an attempted suicide and a crazed gunman add spice when things might be moving too slowly.

I love the Beulah/Bethany relationship in particular, two entirely different women who are just destined to be together even when the barriers seem unsurmountable. And the central character, Izzy, is a saint and is the glue that seemingly keeps everyone else going in extreme circumstances.

The closing pages, with several goodbye scenes, would make a stone cry. But the author surpasses all with her beautifully-crafted ending which echoes the story’s title.

Very much a book for women but I still loved it. Guenette is a craftswoman who lets her work see the light of day only when she is sure it is as good as she can make it. Another five stars and I’m pleased that there’s a further work in the Crater Lake series in the pipeline.