How are you with languages? Other than your own native tongue that is. I’m rubbish. Efforts were made to teach me French, Spanish and even Latin at school. I think I scraped a pass in French having opted for it as my one compulsory language. But even now, living within sight of the shores of Normandy, that language is a mystery to me. Like generations of Brits before me I have most success when shouting at the natives and waving and pointing a lot. They understand eventually and smile and bow apologetically. Or maybe not.

Why can’t everyone speak English? Do you know that, in the British Isles alone, there are no fewer than 11 recognised languages? That’s not counting the regional dialects, some of which (like Geordie) are virtually indecipherable. Of those eleven, ten are kept alive by artificial means.

Here in Jersey a small band of dedicated enthusiasts keep Jèrriais alive. Up until the 19th century this was the native tongue. I recall the tongue being spoken by old chaps in the late 1970s in the bar of the Royal Hotel, St Martin. Now it is no longer spoken, even in the rural parishes. This hasn’t stopped the admirable enthusiasts, Geraint Thomas and Tony Scott-Warren pre-eminent among them, from making the old language accessible to all, especially within schools. I have the greatest admiration for them but it will only ever be an interesting academic exercise. 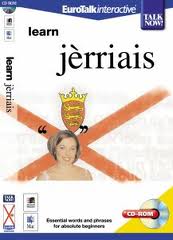 Guernsey and even Sark have their own, differing, French-based native equivalents. Our fellow islanders in the Isle of Man have Manx. There is Scots, Ulster Scots and Scottish Gaelic. The Welsh have a significant population of speakers, those of Cornish somewhat fewer.

Which inevitably brings one back to Ireland. It is still compulsory to learn Irish in secondary school and it is the bane of many a scholar. Consequently it is not looked upon with fondness by many. Times past you needed to demonstrate competency in the language to land a job in the Civil Service, and teaching – maybe you still do. It is an official language of the European Commission. And yet, for all the claims to the contrary, hardly anyone speaks Irish in their daily lives. The areas of the Gaeltacht are mainly in the west with enclaves in Cork and Waterford. I’ve yet to hear the native language spoken in any of those places – shops, bars, anywhere. Oh I’ve no doubt there are many that are able to speak it fluently, and even more that have a few phrases. It’s a beautiful language but again kept alive by artificial means.

I read that the aforementioned European Commission spend US$1.4billion per annum in translating all of their business into more than 20 languages. Just how many people do you suspect ever pick up and read the documents produced in Irish?

Blogger and writer colleague Julie Israel is (unwittingly I think) slowly compiling her own (8,001st) language so inventive is she.

Would the world be a happier place, a more peaceful place if we all understood what everyone else was saying? There’s an idea, maybe no one thought of that before. But if that was the prize I’d certainly be willing to try a bit harder at the French, or Esperanto or whatever. Wouldn’t you? But no, all the efforts are going the other way.

Time we ditched minority languages and reaped the rewards? Throw away richness and diversity in favour of mutual understanding and harmony? What do you think.