That nice old Michael Karkoc down in Minneapolis. Retired carpenter, churchgoer, liked by everybody. If the allegations are correct he was a high-ranked Nazi commander responsible for the massacre of many Polish civilians during WW2. Who would have thought?

Karkoc is only unusual in that he has been identified. Among us today are many murderers never brought to justice.

The Boston Strangler
Between 1962 and 1964 thirteen women were strangled to death in the Boston area. A man, Albert DeSalvo, confessed and was convicted. Since then it has been thought that it was highly unlikely that DeSalvo was the killer – there are far too many inconsistencies and in fact DNA analysis has cleared him of one of the murders. He was however an attention-seeker and, properly convicted of a separate crime, he thought he’d like a bit of extra publicity while he was about it.

Albert DeSalvo, not the Boston Strangler

So, residents of Boston, take a second look at that old chap sitting on his porch, throwing a ball for his dog. Could the real Boston Strangler be him?

The Birmingham pub bombings
In November 1974 21 people were killed and 182 injured by two bombs. The same night six lads were arrested at Heysham waiting for the Belfast boat. To the acclaim of the public they were convicted and locked away.

Sixteen years later they were released on second appeal. The confessions had been beaten out of them and the crucial forensic evidence was seen to be pathetically weak.

Which of course leaves a question. It is apparently an open secret who the bombers actually are. The top IRA people know, the UK Special Branch know. The survivors and relatives of those killed continue to push for arrests and trials. 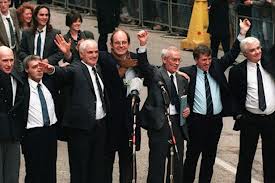 So, next time you’re in a Dublin bar, take another look at that couple of old fellas drinking their pints in the corner. Edge closer. Try to hear what stories they’re chuckling about.

The Finnish waitress in Jersey
In December 1966 the beautiful Tuula Hoeoek left her lodgings in Spencer Close (around the corner from where I live) and walked to the bus stop at Georgetown. She was due to meet friends at a hotel out along the coast road. She was last seen alive waiting for the bus in the pouring rain.

The next morning she was found battered to death at the entrance to a field down a lonely lane in St Clement. Those first on the scene destroyed any chance of preserving useful evidence and no one was arrested.

To their credit the Jersey Police have recently re-opened the case and have been pursuing new lines of enquiry despite the passage of time. However it looks likely that their efforts will prove in vain.

So, that creepy old bloke who you see leaning on his gate as you walk to work – was he the murderer? Is he still alive? If so, where is he?*

*Edit May 2020. Now there seems to be a growing feeling that Edward Paisnel, the ‘Beast of Jersey,’ was probably responsible. He was active between 1957 – 1971 so it was within his timeframe. Certainly in the early part of his ‘career’ he used to drag women into fields and assault them. Tuula would have been his only kill, but maybe she fought back fiercely enough to provoke it. After Paisnel’s capture he hinted that he may have killed, but in the event it seems he was never questioned about Tuula. I wonder why.

23 thoughts on “Murderers Among Us”