I haven’t picked up a work of science fiction in many years. I have therefore no real points of reference when critiquing this book, nothing in its genre to compare it to. I downloaded it because (a) it was free and (b) co-author Rohan Healy writes such impressive stuff on a variety of subjects on his blog. I began reading with reservations and lined brow, sure I wouldn’t take to it. Several days later I was eagerly looking for the release date of the next part of the story!

Strangely, one sci-fi book I read a lifetime ago was Orwell’s Nineteen Eighty-Four. The authors’ futuristic home planet of Carthage bears more than a passing resemblance to Orwell’s Airstrip One. Keep your nose clean, follow the rules and you are allowed to enjoy the limited and artificial pleasures provided in the Green Districts. Displease the powers-that-be and you are sent to live in the Yellow Districts where it permanently rains – I couldn’t help comparing the Yellow Districts to Elbonia, the mud city in the Dilbert cartoon strip. 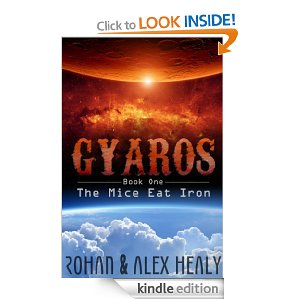 If you foul up badly – as our protagonist Miles does – off you go on a one-way shuttle to Gyaros, a once thriving colony now abandoned to its fate and where undesirables are shipped for good. There, it is assumed, your life expectancy is days if not hours such is the harshness of life.

Crash landing on Gyaros, Miles teams up with fellow deportees Maxen and Landi. The latter is soon eaten by a cave monster but the remaining pair make it to The Dustbowl, a frontier town where life is cheap. Miles finds employment in a diner but soon discovers what the recipe for its succulent burgers is. And, soon enough, he has a choice to either become part of the recipe or to go catch and kill others instead.

Choosing not to kill young Lucy, instead Miles teams up with her and eventually Macken reappears, making a team of three heading for the Gyaros capital New Fortune where Miles hopes to find passage home to Carthage. Many adventures en route of course.

The action never stops. There is violence and killing a-plenty, but this reader at least was rather detached from it. It was (I imagine) like playing a game on a console. Lucy’s arm is chopped off – ouch! Miles eats a person-burger – yuk! Shades of Cormac McCarthy’s The Road which has you turning pages with dread, reluctantly whereas in Gyaros it’s a bit of a game.

The lads must have had a ball writing this. I loved it that things just turn up when most needed. After climbing a weather tower and defeating an army of thrashwing birds Miles and Macken are too exhausted to climb down again. No problem – they find parachutes in their back packs. Ready to be eaten by ferocious creatures in a feeding pen the three friends find that a door has been left open and they walk to freedom, no bother. And instead of running away they sort of hang around outside for the rest of the day.

This is billed for YAs 17+ but it just goes to show that some YAs never grow up. I loved it for its sweeping and unpredictable action in the knowledge that the good guys would somehow prevail and make it to the next part of the story. Great stuff Rohan and Alex.