The memoirs of an English prison warden, pure and simple. The author joined Her Majesty’s Prison Service in 1983 and served for 25 years in a number of establishments before taking early requirement.

The title of the book is interesting in itself. ‘Turnkey’ is an archaic word for jailer, from the days that a prisoner was afforded little or nothing in the way of consideration or care until – if they were lucky, they were freed. Throughout his book the author considers the balance necessary between secure custody of the inmate as required by law and the level of empathy and dignity which makes life bearable for both jailer and jailed. 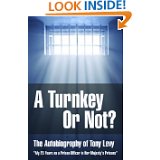 The story is straightforward. The author’s application to join the Service is only semi-serious as is his attitude to the training period when he is unexpectedly selected. Throughout his career he sees himself as something of a maverick, speaking his mind to the consternation of his superiors , not one to toe the party line. Nonetheless he is conscientious and determined that he will always do a professional job.

As might be expected the author paints a picture of the daily routine of a prison officer – checks, counts, recounts, paperwork all done with military precision. However all involved are human and there are any number of anecdotes to spice up the monotony. He starts at Pentonville Prison in London and the distinctive stink of the place, though he becomes accustomed to it, he never forgets. Overtime rackets, sick leave rackets, they’re all here. From time to time the author half-heartedly seeks promotion, for the money rather than any real wish for recognition. He experiences different establishments and different categories of prisoners. Throughout he displays genuine empathy for those under his care and custody, comradeship with his peers but often a certain contempt for his superiors who, in turn, treat him with suspicion.

Finally, with the Service changing rapidly, and not to his liking, the author takes early retirement.

This is a good and entertaining read and it will, I’m sure, be read by many of his fellow officers and hopefully by members of the public, most of whom will have a knowledge of prison life received only from what they might have seen on television or at the cinema.

And, by the standard of some independently published books, this one is well edited and proofed so much so that the very few errors jump out. The end of Chapter 20 has a section which should have been removed in place of an edit appearing just before it;  the word ‘nepotism’ is wrongly used; and there is no excuse for a Spurs fan mis-spelling Gary Lineker! But I nitpick to show that you can never have enough proofreads.

Good luck to Tony Levy with this good effort.

17 thoughts on “Book review – A Turnkey or Not? Tony Levy”