I met the great man himself yesterday, for the very first time. John Nettles is of course an adopted Jerseyman having played the lead in the Jersey-located TV series Bergerac for eleven years. His daughter has lived and worked in the Island for many years.

You’d imagine the last thing the world needs is another book on the German occupation of the Channel Islands (1940-45). Every angle has been covered, every story recorded. You’d spend a year or two reading through all the material they have in the General Library alone never mind the stuff they have at the Jersey Archive.

But Nettles has managed it with the publication of Jewels and Jackboots. This is a beautifully-produced hardback book with many illustrations. It also promises to throw up new stories and to examine that five-year period in new depth. The fact that Nettles has enlisted the likes of Michael Ginns and Bob Le Sueur, absolute authorities on local history, gives this book great credentials.

The blurb on the dust cover promises much. The general view of the Occupation is, as Nettles points out, ‘uncomfortable but not horrendous, unpleasant but not unendurable...’ Nettles says ‘That is not the truth. The real history of the Occupation is very different from that. It is the story of a sustained and wholesale attack on human values, of great suffering, venality, violence and grotesque and hideous murder.’ 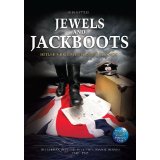 Powerful stuff and here’s hoping the book lives up to the promise. Nettles is 69 now but he was charming the birds off the trees at the book signing at the Jersey War Tunnels yesterday. The older folk in particular love him and he is delighted to talk to everyone, with the result that the queue moved very slowly yesterday. I don’t think he was impressed that I didn’t want a half-hour chat, just a signature. ‘Immediatement, Monsieur!’ he said before turning his charm onto the next customer.

It’s a steep £25 but the royalties are going to Hospice Care. I imagine it will be easily available locally but otherwise through Amazon – click on the image above.

2 thoughts on “The new John Nettles book on the Occupation”