I’ve not been to the Mountbatten Stadium in Portsmouth for the county athletics championships in some years now. What I do recall on each of these May occasions is inevitable drizzle and a wind whipping off the nearby tidal Fareham Lake. We used to huddle as a team up in the bowels of the stand until forced to descend to the track.

Not this year. The whole of the substantial group of athletes, coaches, parents and spectators were sprawled around the grass and the cycle track – proper athletics weather. You can read the athletics report here. But by the end of Day 1 I was sunburnt and as thirsty as a sponge. Having no manager or coach duties I was blissfully free to do as I wished. And what I wished was a decent pint.

It’s about a 25-minute walk from the stadium to Hilsea station and my train back to the hotel. Eight hours previously I’d taken note of The Green Posts, an establishment that promised good things within. There’s been a pub here for a couple of hundred years I believe and the ‘green posts’ in question are supposedly those things you tie your boat up against. Possibly, way back, this was coastal land. Whatever, I didn’t care about that. I looked for the Real Ale pumps – disaster! There was one but it was not in use – not a good sign. So a cold pint of Guinness and up onto a barstool.

A lively but good-humoured crowd were in, a few pints to the good most of them at this stage. Then it kicked off! Two combatants lurched my way bawling and shouting, fists flailing inaccurately. The man on the defence picked up a chair and tried to fend off the aggressor, lion-tamer style, all the while protesting his innocence. The combatants were separated at last, and led outside. Peace reigned. For a minute or two. Like extras in a Wild West saloon brawl they came roaring and hitting back in the door. I drank up, made my excuses and left. 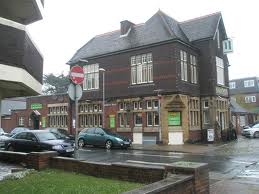 I thought that was it, Hilsea’s only bar. But happily, as my thirst still raged, I espied the Coach and Horses (rebuilt 1931) lurking just off my route. I looked in warily and, amazingly, it was nearly empty. It is something called a ‘flaming grill’ pub. Now I hate pubs that are restaurants in all but name. (The previous night was a perfect example – The Fleming Arms near Southampton Airport is almost overtly hostile to non-diners despite having a good range of ales.) At this early time in the evening though the place was quiet and, alleluia, they had Bombardier and Directors on tap. Very nice it was too. Without fear of getting a chair in my earhole I lingered over a couple before making my way happily back to the station.

Is that it for Hilsea? Let me know if I missed one.