One of Jersey’s best and free amenities is the Railway Walk, which follows (strangely enough) the old line from St Aubin to Corbière. On high days and holidays it can be very busy with walkers, joggers and bikers, but not so much on a drizzly Sunday morning.

There’s always plenty of interest along its 3½ mile length, starting at St Aubin with the railway tunnel, now a home to a bike hire company. This was not a part of the original plan but it was decided to iron out the dodgy kink at the bottom of the hill by blasting a tunnel; those Victorian engineers just threw men and machinery at it and the tunnel was completed in 1898. Next to the tunnel entrance are the German tunnels where the bobsleigh team have a track to practise their push starts.

It’s a steady climb from St Aubin to Les Quennevais. The first station on the line was originally Greenville, just past where the line passes over Mont Nicolle. That station was soon abandoned as it was little used, but also because of the time lost in getting up to speed again up the significant slope. Still plodding upwards, just across the main road was Pont Marquet station, with the station buildings where the little car park now is. Through Pont Marquet Country Park, excellently managed and the venue for the recent inter-insular cross country. 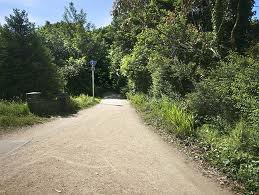 General Don was better known as a road builder, transforming Jersey’s muddy lanes into proper tarmaced roads, the better to aid troop movements. He lived at Don Farm and soon we reach Don Bridge station which served the racecourse, the latter closing in the late 1950s. The course has since been replaced by Les Quennevais Playing Fields. This morning there was a bike race in progress around the perimeter cycle track, the cyclists travelling anti-clockwise, the opposite direction to the horses of yesteryear. 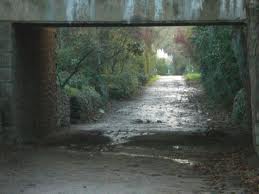 To the relief of the runner this marks the high point of the track. Now it’s down past Blanches Banques station (the platform remains clearly visible) which serviced the golf club but also the POW camp down on the dunes.

To the right there are a few morning golfers and the view opens up over the links to the misty dunes which sweep down to St Ouen’s Bay. Over a couple of roads to the penultimate station La Moye.  A little further onwards you’ll notice a fork off to the left. This was in fact the route of the original line, running off over to the quarries (which was the principle reason for the extension from St Aubin). For a while, until the quarry ceased operations, there was a junction here with a halt named Temporary.

At last one reaches Corbière, the end of the line. Here the platform and station building are still intact. The latter has been modernised at great expense and, the last I heard, it was still on the market, probably at a slightly less outrageous price than that first demanded. 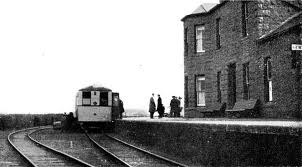 This renovation hasn’t gone down well with the locals and railway history buffs, but I think it’s a great example of preserving history within a modern framework.

Here as well is the ancient Table des Marthes and yet another German bunker right at the end of the line. 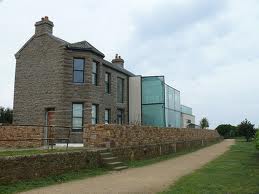 Then the slog back up to Quennevais and I bravely resisted the temptation to stop for coffee as I picked up the pace (everything’s relative) on the drop back down to St Aubin. 7.36 miles and very enjoyable.