My latest Couch to 5k running group have just about flown the nest now. I was therefore left to my own devices at Les Quennevais this morning. Instead of leading a 32-minute jog I set off for a little jaunt of my own. I don’t think I’ve run on the dunes since I returned from Ireland but it was a great spring morning to get reacquainted.

A little way along the cycle track (which more or less traces the path of the old racecourse, last used in the late 50s) you can jump into the woods just south of Creepy Valley. This is one way to get onto the Blanches Banques, an extensive set of shifting sand dunes over which you drift slowly down to sea level. Legend has it – probably correctly – that the ground was fertile many centuries ago, but great storms and floods left the landscape we know today. 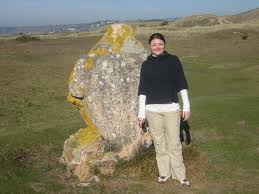 Menhir on the Blanches Banques

It’s what the naturalists would call a ‘delicate eco system’, home to many rare species of flora and insect life. Delicate certainly, and you almost feel guilty as the ground moves beneath every step you take. Fortunately the dunes attract only joggers, walkers and their dogs so the damage is slight. Coming down onto the flatter, scrubby area you find a few prehistoric standing stones. Over to the right, should you wish to detour that way, you’ll find the foundations and other interesting bits of the POW camp used by the British Army to house Bosch prisoners during WW1.

The next time the Bosch arrived they stayed for five years and you’ll find one or two of their many fortified constructions in the area.

Out onto the Five Mile Road and around the Petit Port headland. More German fortifications and – though one rarely strays from the outer path, the remains of a passage grave amongst the gorses above; it’s a bit of a spooky place.

Before reaching Corbiere you can cut up a path which runs through the grounds of the former Chalet Hotel, closed these last 20 years perhaps and now demolished, no doubt awaiting planning permission for apartments. I remember having one or two nice meals there in the days when drinking and driving went together like cheese and biscuits.

Onto the Railway Walk, old friend to the Island’s runners. Heading back to Les Quennevais you pass the plentiful remains of the platform of Blanches Banques Station, mostly used by golfers back in the day, but also by British troops and their prisoners housed further down. Just behind there another German communications bunker, still with its little chimney intact.

After a worthwhile 5.4 miles a bacon roll and a coffee at the welcome new concession Off The Rails (geddit?) just beyond Don Bridge.