My occasional theatre critiques are either hampered or helped by the fact that I know nothing of acting and the ways of the theatre. On the one hand therefore I am blissfully ignorant of what might be considered good or bad by the seasoned theatre goer. I am however able to watch the show free from any prior expectations and to comment on it with baby-like innocence.

I’ve rarely been disappointed by a show – possibly once by a mediocre affair at the Gate Theatre in Dublin which I’d have abandoned at the interval only for the fact that I was in company.

I certainly wasn’t disappointed tonight (possibly by the £17 ticket price). The offbeat Curious Directive company brought a compelling show to a sparse Arts Centre audience. The central theme is of extreme Norwegian cold and the cast of five play out four simultaneous playlets, interwoven into one dramatic piece. 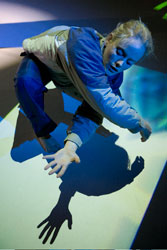 We have a 19c cartographer who battles the elements to complete a mapping assignment but whose journal records his succumbing to the sub-zero temperatures and he freezes to death in front of the audience. The true story of Anna Bagenholm is also told; she was a skier who became trapped beneath ice in 1999 but who almost miraculously was revived after several hours of extreme hypothermia. A young businesswoman travels to Norway to scatter her father’s ashes only to fall in love with both the country and her guide. Finally a look into the future where cryonics is becoming accepted but where human emotions are as strong as ever.

With imaginative use of minimal props the cast act and interact to the overloud backdrop of a piano score. Clever use is made of a cats cradle grid symbolising the mapmaker’s art. Anna returns again and again to her position under the ice and her revival begins anew. Finally the cast blend together in a powerful piece of choreography that pulls all the threads together.

Remarkable and moving, the show plays again tomorrow (Thurs) before moving on to Chipping Norton. And as always I was glad I make the occasional effort to patronise the theatre.