There was a time, before they started blowing up civilians, that the Irish Republican Army were a true citizens’ army. In the War of Independence with Britain they formed hit-and-run guerrilla flying columns to hit back at the hated RIC Auxiliaries, the Black and Tans.

Commander Tom Barry of the Third West Cork Brigade resolved to hit back at the British troops to show them that their atrocities would not go unavenged. A week earlier 14 civilians had been murdered by the British at Croke Park, Dublin by way of reprisals. At 2am the following Sunday 36 riflemen fell in at Ahilina, Cork and were told their mission. The mens’ confessions were heard at the side of the road. Ninety one years ago today they were in position by 9am overlooking a lonely spot of roadside between Macroom and Dunmanway, there to await the enemy. 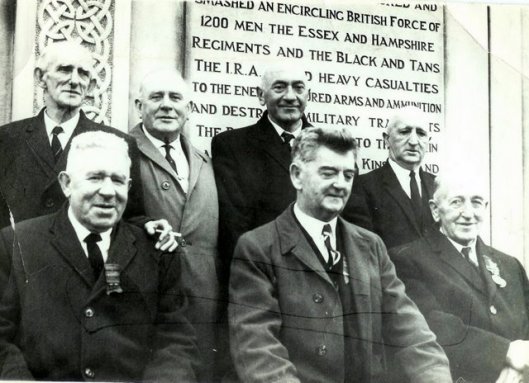 Tom Barry and survivors at Kilmichael, 50th anniversary of the action

They waited, wet and cold, until mid afternoon until two lorries approached carrying a total of 18 highly-trained Auxies. The lorries slowed at the sight of Barry in British uniform in the middle of the road. Immediately the Brigade opened fire. With several of their number killed the Auxies called for a surrender. The gunfire ceased and several of the Brigade approached. The Auxies picked up their rifles again and shot three of the IRA men whereupon Barry ordered his men to fire again and keep firing, despite a second surrender.

Sixteen Auxies died, two survived. Three of the IRA Brigade lay dead or dying. To restore discipline amongst his shaken, inexperienced men Barry drilled them back and forth in the road before marching away.

The repercussions were to be severe but it brought home to the British that they were in for a long and bloody struggle.

Today the roadside at Kilmichael is still wet and windswept, the memorial pictured bears witness to the action and it is quite easy, when standing there, to envisage the bloody noise and slaughter of 28th November 1920.

Video of Tom Barry at Kilmichael