It would be sad not to try to acknowledge the fairly extraordinary week we’ve had weather-wise. Today I believe sets the all-time record high for October temperature in Jersey, weighing in at around 26-27 degrees. We’ve a couple more days yet before it breaks and, if I were the race director of tomorrow’s Jersey Marathon, I’d be a worried man.

I’m fortunate to live in an apartment overlooking St Clement’s Bay. Tonight I’m able to sit on the balcony and type this wearing only my running shorts. There’s a sliver of old moon directly to the south, its reflection coming ashore across the calmest of half-tides. People and dogs are lazily walking along the shoreline; a family are enjoying a barbeque on the sands just below me. Across the bay the lights of a boat out of St Malo as she cuts her engines on the approach to St Helier Harbour, the red warning lights on the clusters of rocks that guard the approaches winking tirelessly.

On Thursday evening I took my beginner running group down into the Marina area. In the moonlight groups of people were sitting around chatting, quietly sharing cans of beer without the need to shout and bawl about it. Couples walking arm in arm, enjoying the unaccustomed warmth. A couple of lads were up on the sea wall entertaining passers by, and themselves, with a fire-eating trick. It was a reminder of how things are in warmer climes where people don’t dream of eating before 10 and then happily socialise, without creating trouble, into the early hours. 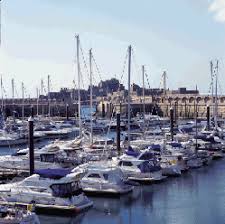 And unless it’s my imagination the many Jersey whingers and moaners have been less in evidence this last week. We must have the greatest proportion of malcontents of any place. These are divided into two groups; those that have all the answers but wouldn’t dream of actually trying to put them into practice, and those that are content to sit and generally complain about anything and in doing so make themselves and those around them eternally miserable. It seems to me that both lots have decided to give us a break these last few days.

So yes, we’ve been blessed. I’ve heard it said that we’re in for a harsh winter – well that’s fine by me – everything in its season. I wonder if I’ll ever again be sitting on a balcony in October in shorts only. At night the balcony doors are flung wide open and the mozzies have free entrance.

Meanwhile I fear for the marathoners tomorrow and the medics will be kept very busy. Those last 6-8 miles are hard enough under normal conditions.