In fact she is alive and well and dwells in Heffernan’s Bar in South Main Street. The present proprietress was initially startled to see a customer in her very basic bar early on a Sunday evening but she had my life story from me before my backside was

settled on a bar stool.

Whilst Waterford seems to struggle with its identity, a feeling that it is punching below its weight, Wexford seems, at first sight, to be content as a distant satellite to Dublin but secure in its own individuality. These two communities of the sunny south-east have similarities; both have long quays and both have bridges across the rivers on which they stand leading to a Ferrybank on the land mass opposite. On Sunday evening the whole of the youth of Wexford seemed to be crammed into the Chaz Bar on the waterfront, a nightmare of music and the screeching of customers trying to converse with one another over said music – I guess I’m getting old. I settled for a quiet one in the nondescript Barrett’s  a few yards down the road 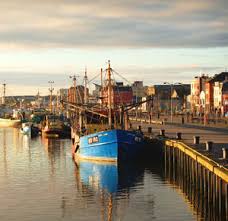 Monday evening’s search for ‘old men’s’ pubs didn’t get off to a great start. Maggie May’s didn’t fit the bill at all with the clientele all drinking cider or lager. The Guinness was served without care and wasn’t great. I hurriedly moved on to the Crown Bar, a vast emporium, mostly empty, but which delivered a good pint. I wondered at why a bar thus named would display a copy of the 1916 Proclamation, a paean to Constance Markievicz plus other anti-Brit memorabilia.

Wexford has great history – the original Viking settlement sprung up here around 800 AD. Not too much remains physically for the visitor to inspect. More recent in folk memory is 1798, one of the bloodiest in Ireland’s sad history. One of the set piece battles of that year’s Rising was at nearby Vinegar Hill and the atrocities on both sides are well documented.

But off to Bugler Doyle’s which to me typifies where many Irish bars fall between traditional and modern – comfortable, spacious, plenty of random photos, sketches, bar paraphernalia, but with Messi and Fabregas holding the attention of the few customers up in the corner on the flat screen. Nice pint though.

Highlight of my short visit though was the Sky and the Ground. Named (I was told) after Wexford singer-songwriter Pierce Turner this is a barn of a place. Half the town seemed to be in there as 9.30pm approached – very much, but not exclusively, an older crowd. Sure enough, in the corner a ceilidh band struck up – a fiddler, bass acoustic guitar and two accordions. They soon had the crowd clapping and foot-tapping with a mixture of Scottish, Irish and even cowboy tunes – it’s many a year since I’ve heard Red River Valley! This is a ‘session’ as it’s meant to be – these lads won’t have a website or a Facebook page, or even a name.

At the end of each tune the old fiddler’s face was wreathed in smiles at the simple joy of just playing.

Slightly swaying by this time it was back to the hotel via Heffernan’s, still no other customers but this time regaled by young Mr Heffernan whose grandfather is pictured, standing outside the (basically unchanged) frontage of the pub in the early years of 1900s. The Guinness barrel expired having delivered three-quarters of a pint and this seemed an appropriate moment to wrap up my first trip to Wexford. I hope it won’t be my last.

3 thoughts on “There was an old woman of Wexford…”