Douglas, a busy suburb a few miles south of Cork city, is a regular staging post for me on my Irish trips. Once settled in my old friend Deirdre’s kitchen with the kettle on I feel as if I’m home again. The danger is, unless I keep running, I leave there several pounds even heavier than I am at present. Fortunately, to the south and east of the city there are a number of dedicated trails taking in magnificent views of the Lee estuary. Prominent and popular with joggers, walkers and cyclists is the old Cork, Blackrock and Passage railway line which opened in 1850 but closed in 1932. Mercifully there are no hills in the estuary area and I

managed a fourth consecutive one-hour run, extended a little by a non-intended detour.

Time then to jump in the car to head back out to west Cork to pay some visits. First on the list were my great-grandparents on my mother’s side, Patrick & Margaret, dead these last 70-80 years together with their infant son John who would have been 100 this year had he lived. With modern aids such as Google maps and satnav it was an old fella in a bar that directed us to Kilbrogan Cemetery in Bandon. On further west to Dunmanway and a call to see the grandparents on my father’s side, Florence (d.1959) and Ellen (d.1967), both of whom I remember. Also fresh in the memory are the steam trains on the West Cork railway, though I was only eight when that line was closed in 1961. Finally we paid respects to Sam Maguire, son of Dunmanway and a competent sportsman, but most famous for lending his name to the prestigious All-Ireland Gaelic Football trophy. 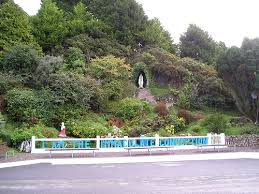 All of which gives one a thirst and it was off to my favourite of all bars, the South County, for a cool pint of Murphy’s (€4.10). A shout out for Torcan, a ‘new-style’ trad trio who have the Wednesday residency here. Like Firedrill at Ballyvourny they have one talented musician who carries the band, but live music is always worth paying attention to.