Tucked away in west Cork you’ll find this extremely picturesque spot. The religious significance is there, as it is in thousands of places across Ireland, but visitors are drawn and captured much more by the setting than anything else. It’s a fair old drive out into the sticks but well worth it. The present day church built on the (supposed) ruins of St Finbar’s 6th century monastery sits on an islet straight across from the car park, reachable via a causeway. For most visitors that’s it, a photo or two, and a coffee in Cronin’s bar and cafe. 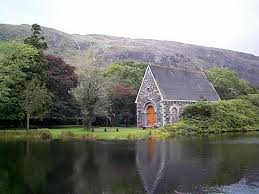 But there’s far more to Gougane Barra. The lake itself was carved out in the glacial era and it lies, deep and peaceful, beneath high cliffs. There is a tarmaced road around the lake through the forest along which, for €5, you can take your car. Instead I set off in my running gear on heavy legs after two good runs on the preceding days. It’s only as you get into the forest that you get the real payback for your visit. Off-road opportunities abound and I headed off amongst the trees along a stream which splashes through rocks and boulders. The work of nature in centuries long gone is plain to see here. Boulders ranging in size from small to gigantic cover the floor of the valley and all up through the wooded slopes. Only in comparatively modern times has the geology settled and the boulders covered in trees, grasses and mosses. 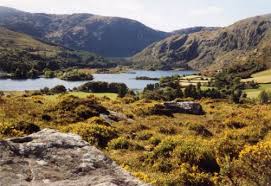 But 25 minutes in and I’m suffering and turn back towards the car, gladly taking every opportunity to stop and read the discrete information boards. The forest is owned and managed by Coillte, I suppose equivalent to the UK’s Forestry Commission. Here are Sitka Spruce, Lodgepole Pine, Japanese Larch and Conifer. The last of these is native to Ireland but, having disappeared in the post-glacial era, is now being reintroduced.

On the way back my right calf suddenly un-knots and I change up to second gear, feeling a little better. Accordingly I head off the tarmac up a trail to the right and I’m into the serious business. Zigzagging remorselessly upwards through the trees I’m soon in good, breathless, sweaty territory with the legs feeling a little stronger. The trail is well maintained, steps where necessary, so my lightweight Frees are proving ideal. (I don’t think I could ever go back now to my trusty Asics, or even heavier Hi-Tec trail shoes). Eventually the trail descends through the trees back to the road and it’s a short jog back to the car park.

Eschewing the popular Cronins I instead stop at the first bar in Ballingeary to grab a pint of icy coke before heading for Cork.