St Patrick’s Hill runs abruptly into Bridge Street and thence across St Patrick’s Bridge.  Spanning the north channel of the River Lee the bridge takes one across from the northern part of town into St Patrick’s Street, Cork’s main shopping thoroughfare.  Over the years Patrick Street (the modern Irish habit is to ignore the ‘St’ in front of street and place names) has seen popes, presidents, queens and all other manner of bigwigs parade down its wide, curving way. 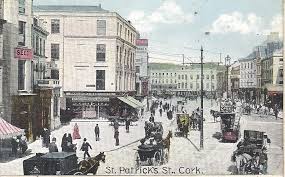 Until the late 18c Patrick Street was in fact a channel of the River Lee, and it’s long left-to-right curve follows the old channel.  At the river end Fr Mathew, a temperance reformer, resisted a temptation to move him when the street was redeveloped in 2005 and he still stands by the taxi ranks.  Either side is a mixture of department stores and smaller businesses, many of them long-standing city traders or the descendants of these.  The ubiquitous Brown Thomas, Debenhams and Waterstones are there, but generally the modern street has echoes of the old city that you won’t find in Dublin’s Grafton Street, for example.

Both sides of the street are invariably crowded.  If there was ever a temptation to pedestrianise Pana (as it is often referred to) that has been resisted.  Taxis and buses line the street and the traffic hardly moves during peak times.

A feature of the place in the afternoon onwards are the Echo men who proclaim the city’s evening paper.  There are street entertainers but the city is noticeably free of the disturbing low-lifes that you find everywhere in the capital.  Cork does have more than its share of characters though and Pana and the surrounding streets have them in profusion. 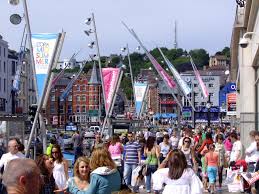 Note the street lighting which again echoes earlier times when sailboats and barges would have travelled up and down here.

Off to the sides are interesting little lanes, a haven for tourists.  Amongst the many bars of note are Counihans, a trad music venue and An Bodhran, a lively music spot in nearby Oliver Plunkett Street.  Scott’s is a less traditional bar where I met up post-2008 Cork Marathon with a crowd from the forum boards.ie.

You can access the English Market via Patrick Street.  Trading since 1788 (as the Protestant answer to the nearby natives’ Coal Quay Market) the English Market is now one of Cork’s must-see attractions.  It teems with life and it is the only show in town if you are looking for meat, fish, poultry and stuff.  The Queen

stopped by recently and

was tickled by something this trader had to say.

Prince Phillip was reported to have asked a fishmonger ‘What’s in your fishcakes?’ to which the reply was ‘Fish, what did you think?’   There’s not too much hat-tipping to royalty in Cork!  An even more iconic picture of Lizzie’s visit to Cork was when, to the consternation of her security staff, she went walkabout to the delight of the crowd.  If ever she was thought of as aloof she melted hearts by responding to the special needs lad in the crowd and making his day.

So, Patrick Street which I’ve been up and down for the last 50 or so years.  I feel like I’m at home there.