Mallow is the switch.  On the way down from Dublin – usually first-class, one of my few extravagances – I’ll have had my nose in a book or be plugged into the i-Pod.  Rumbling southwards through the Midlands you always wonder just how many shades of green does the Irish countryside consist of; I’ve never counted, but Johnny Cash’s estimate can’t be far off.  Limerick Junction is strange – it seems to exist only because of the railway and there’s little else there.  But Mallow is where my spirits start to rise.  Not because of Mallow.  I overnighted there one time long ago and it had little to say for itself – maybe it’s improved.  No, it’s because I’m within spitting distance of Cork city.  Twenty minutes more and you skirt Blarney with its castle and Woollen Mills, you note the hills with their transmitter stations.  Slowly you rumble through Blackpool, a suburb still pretty run down despite regeneration attempts before disappearing like Carroll’s rabbit underground before popping up to glide into Kent Station.

You find yourself a little to the east of the city centre on the Lower Glanmire Road and it’s an easy walk in.  Already the air smells sweeter, drifting over the sidings from the docks beyond.  A little way along is MacCurtain Street, named for the Lord Mayor of Cork who was murdered in front of his wife and child during the Civil War in 1920.  MacCurtain Street has a sort of cult status these days.  And truly all human life is there.  You have the gaudy LeisurePlex at the junction with Summerhill.  Then there are all manner of cheap hostels, internet

joints, cafes, dodgy-looking bars.  Further along it gets slightly classier with the Metropole Hotel, the Everyman Theatre and the adjoining Dan Lowrey’s Bar – this latter always an early port of call.  Across the road is Hotel Isaacs where I’ve stayed a few times now with it’s overrated and overpriced Greene’s Restaurant. Further along a few ethnic takeaways.  Also Crowley’s Music Shop where Rory Gallagher bought his favourite Stratocaster in 1963 (though the shop was then over the river on Merchants Quay).

Further on down, still walking parallel to the river, one enters Coburg Street. Ignoring the popular Sin E (shin aye) I have a pint in the Corner House.  A cracking bar, old fashioned and spacious with odd nooks and crannies in the Irish fashion.  They serve a pint of the Franciscan Well Brewery’s excellent wheat beer.  Most nights there’s also a bit of trad or blues up in the corner.  Now, here’s the thing.  This establishment was formerly run by my cousin Mary and her husband Frank (RIP), but back then it was just a quiet town boozer called The Greyhound.  It’s changed for the better.

Talking of which I’d best pay Mary a little visit.  A task not to be undertaken lightly because she lives right at the top of St Patrick’s Hill.  So out of the Corner House, turn right and left and there it is.  Somewhere I read that it’s the steepest residential road in the world.  I don’t know about that but it’s steep all right.  It defeated Lance Armstrong once but I did manage to run up it after a fashion one time.  The views from the top are spectacular. 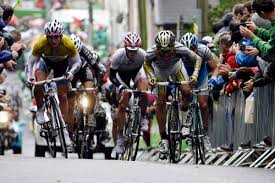 It’s hard to leave this part of town but I’ll see if I can manage for next time.