After 21 days I finally put some recordable running time in my diary yesterday.  Not since I took my first tentative steps in early 2003 have I had so much downtime.  After falling apart in the White Horse Half I’ve not felt inclined to lace up my Frees but I finally broke my duck.  Very gentle and pleasant it was as well.  I trotted the half-mile or so to the track and spent an hour just messing around; mainly slow jogging but throwing in 100 metre strides whenever I found myself at the beginning of the home straight.  With the athletes and coaches away in Portsmouth for the county championships I had the place virtually to myself on a sunny though breezy morning.  It’s maybe quite sad but there are fewer places I’d rather be on a sunny day than an athletics track – relaxing for both body and soul.  I used the surrounding grass banking to break up the run, revelling in the new-mown smell before reluctantly trotting home again some time later.  Truly the best things in life are free. 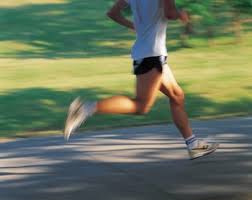 And this morning I was down there early again, thoroughly looking forward to working with the Minis again.  There are as many coaches as there are athletes in the 12-14 age group right now so Sunday mornings are the best chance I get to get involved with the young athletes who are aged about 8-11.  A better turnout of about 25 this morning.  Long-time Minis coach Dave Lawson showed up and we were therefore able to split the youngsters; I took charge of the younger group.  So a warm-up of Stuck in the Mud followed by-

We finished off with a 600m race for those so inclined.  I don’t force any child to do this – I’ve seen too many totally put off at an early age by being made to run middle distance.

A great session, and happily I had three slightly older lads wanting to do throws afterwards.  So we got the javelins out – also the hammer, which is an event too neglected.  As well as the three lads one of the Minis, young Lillie, has 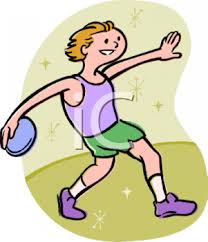 demonstrated she has an aptitude for throwing and she has taken nicely to javelin.  This morning I gave her a first taste of discus remembering how we started Shadine Duquemin at just about the same age.  It’s high time a few others made their mark in the throws and they have every opportunity and plenty of examples to follow of those that have gone before in the last few years.