As it usually is, the annual Spartan bash last night was good fun.  To my surprise this was the eleventh Presentation Dinner that we’ve held since the format was upgraded.  There were 80 or so at The Bar, a good turnout at what was quite short notice.  As usual it was the road runners who turned out in strength – the trackies are usually too young or are away at Uni.  Due to austerity measures however there was no special guest present bringing to an end the run of 10 Olympic athletes who have graced our presence.  Even our own Colin Campbell, summer and winter Olympic athlete, cried off late in the day.  Never mind, President Richard Wilkinson kept us entertained as usual dropping his copious notes everywhere and spinning jokes more suitable for a stag night than a family occasion.

Of course there were many good things to report about 2010.  But nevertheless there has been inertia within the club for too long now.  OK money is tight but there is much that can be done which is not being done, without money. Membership has dropped to a dangerously low level.  Development is not happening with the intensity that once was the case.  People are waiting for ‘something to happen’ rather than trying to make it happen.

Nonetheless, and speaking to Michele Leerson this morning, I perceived that one or two people on Committee have realised this and there is, at last, a little more energy around.  Let’s hope so unless the huge gains the sport has made in the last decade are not to be frittered away.

I believe that we owe it to the likes of Peter Drinkwater.  Back in the late 70s it was Peter who was one of the main agitators for change in local athletics, especially in the provision of decent facilities and a pathway from schools to 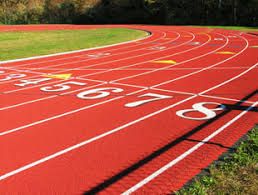 senior athletics.  He was also a pretty damn good runner and still holds the Island 3000m record.  Long since departed these shores he still teaches in Western Australia.  He tells me that he has been recently diagnosed with type 2 diabetes which has just galvanised him into hitting the gym rather than just sit back and take the meds.