In 1752 the British Empire adopted the Gregorian calendar and, as a consequence, September 2nd was followed by September 14th to equalise with the rest of the world, therefore eleven days were ‘lost’, to some concern in certain quarters.   Yesterday I was plodding back along St Clement’s Inner Road towards the church and the next thing I knew I was approaching Le Rocquier School.  I have no recollection of passing the church or indeed trekking up the hill beyond and the descent afterwards.  Where did those seven or eight minutes go?

Something similar happened a couple of years back during a run in Waterford when I just didn’t recall a part of the return leg of an out-and back run.  Does this signal the onset of Alzheimers or do runners sometimes zone out like this so that the brain simply doesn’t register things for a few minutes?

Whatever, I didn’t mind not recalling a bit of what was a crap run.  100 minutes 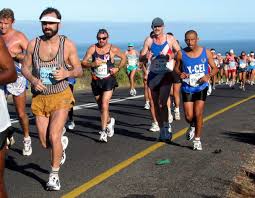 easy was the instruction and I spent the first bit of that checking the distance of the 5k I and my C25k group ran on Thursday evening – it was bang on.  I then pottered out east, looping back at La Petite Sente.  En route I was overtaken by John Cunningham who was starting a much longer run in preparation for the Two Oceans Ultra which takes place this year on Easter Saturday.  This classic race which kisses the shores of the Atlantic and Indian Oceans is no mystery to John who has raced it four times previously.  He’s unlikely to beat Mally Brooks’ twenty consecutive years (1984 – 2003) though.

So Saturday was rubbish but my speed sessions on Tuesday and Thursday were fine.  On Thursday I time-trialled the 5k before going around again with the group.  I felt strong and thought I was keeping up a good tempo so I was disappointed with 25.38; so much different running in a non-race situation though.

I may have misread the programme ahead as some bigger miles kick in from this week – 5.75 hours in all.  I’ll need to put Saturday’s poor run behind me sharpish.