Frankly I’m concerned that, 10 weeks out from Edinburgh, the weekly mileage under this plan is only in the 20s.  I was running high 30s at the same stage last year in preparation for Cork.  In fact the longest run I’m being asked to do is a run/walk of four hours, once only.  At the same time I realise the quality of my midweek sessions is higher and I must be gaining in strength and speed.  I can only trust that the endurance will come because it wasn’t there on Saturday.

However I felt a whole lot better during my midweek runs.  I was able to attack them and you know afterwards if you’ve run well.  The ‘hard run’ on Thursday was interesting – 32mins alternating pace between effort levels (EL) 2 and 4.  This mixing up of pace is apparently a Kenyan thing and I’m sure onlookers probably thought I was a visitor from Nairobi.

I decided to stick by my usual long run route for Saturday – anti-clockwise around the November Half Marathon course.  (Last year, living in the western ‘burbs, I stuck to the Railway Walk and the Corbiere loop.)  The run/walk was set as 80:20, so 16mins/4mins.  This run/walk business sets new problems mentally as you don’t really want to anticipate the walk breaks but you know they’re coming up.  Then, during the walk breaks, I pointedly look at my Garmin every three seconds to assure any watchers that I’m about to set off again and I’m not simply fecked.

Running into Gorey is always spectacular with Mont Orgueil dominating the heights.  Gorey only became of importance during the first half of the 19c when the big commercial expansion of Jersey began.  Oyster fishing was the big trade with some 300 vessels working out of Gorey, inevitably destroying the oyster beds.  The States spent a shedload of money establishing nursery beds only for the dopey locals to raid them as well before they were ready.  In the meantime the shipbuilders of Gorey did a steady trade supplying the fishermen.  The shipbuilding is now, of course, only a memory but there remains a small oyster industry.

Back home for 13.25miles in 2:28.  The time is fine for a run/walk but I’d really be hoping I’d feel fresher at the end.  One issue may be that I see off a bottle of wine on a Friday and head off out the door on Saturday before eating.  Neither do I eat or drink during the run.  Probably good for teaching the body to cope with privation but maybe I could manage things rather better. 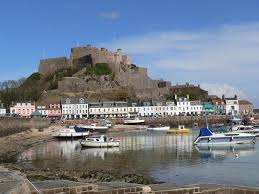