Sport provides plenty of drama, but there are a few instances that are extra special.  This afternoon provided one of those rare occasions.  Italy v France is usually the one 6 Nations game that I can’t be arsed with.  I’ve no interest in either team and anyway France put an average of 45 points on the board in this fixture.  But amazingly Italy led by a point deep into the final minutes as France worked the ball upfield.  In these situations the team in possession will try to get field position and either hope for a penalty in front of the posts or else set up a drop goal.  France had a scrum in the perfect position and, as they were mullering Italy up front, it was odds on that the three points were coming.  The scrum was twice reset as Italy crumbled but France couldn’t capitalise.  Great stuff.

The 2003 World Cup provided similar drama with England  in a losing position but expertly working their way within range.  Jonny Wilkinson was in the pocket for the drop but the forwards twice took it on again so that, when the ball came back, even Wilkinson’s ‘weaker’ right boot did the job.

And probably I’m one of the few that remember Andy Hancock’s try in 1965.  In those distant days England were 0-3 down to Scotland into the last minute.  Hancock got the ball almost on the England line and pinned his ears back to go the length of the field to equalise.

Football?  Even I’m not old enough to remember the ‘Matthew’s Final’ in 1953.  1-3 down to Bolton, Blackpool were galvanised by Stanley Matthews, then 38, and came back to win 4-3 to popular acclaim.  (I almost saw Matthews play but was disappointed when, as a lad, I went to watch Birmingham play Stoke.  Then almost 50, he had been due to play but was withdrawn through injury.)

Other soccer dramas?  England’s World Cup win in 1966 of course.  In more recent times Man Utd’s late two goals to beat Bayern Munich in the European Cup in 1999.  More parochially of course, Birmingham’s win against Arsenal in the Carling Cup Final at Wembley.  In the second it took for Arsenal’s rookie defence to spill the ball at Martin’s feet in the 88th minute all of the many memories of being let down by the Blues were banished as the ball rolled into the net.

Cricket?  Forget the hit-and-giggle stuff.  All the drama’s in the original form of the game.  1981 Headingley anyone?  At the end of Day 4 England were 135-7 and 92 runs behind with Australia still to bat again.  They were a 500-1 shot to win from that position.  What Botham and Willis did next is the stuff of legend.

Badminton?  The best hour of sporting action I’ve ever seen in Jersey.  Island Games 1997 and it’s the team badminton final, Jersey v Guernsey.  Jersey are a game behind with two to play.  It’s the men’s mixed doubles and that will decide the gold as, with Elizabeth Cann and Danielle Le Feuvre, the women’s doubles 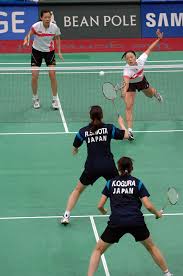 will be a formality for that talented duo.  In the best of five sets the men are suddenly two sets down and struggling in the third.  There aren’t too many watching at the Gilson Hall but interest perks up as Ian Coombs-Goodfellow and his partner (who I forget) start to stabilise matters and slowly chip away at the lead.  There’s renewed hope as they turn the set around, 1-2.  The pressure’s on Guernsey and the good guys, confidence now returning, win the fourth, 2-2.  The fifth is a nailbiter and the tension is unbelievable.  It’s broken at one stage when Ian stops play to deal with a stray fly – ‘Must be a Guernsey fly!’ says one of the watchers and even the players smile.  The tension is huge but the Jersey guys inch home – a fantastic game.  My last memory of that day is Danielle and Elizabeth duly seeing off the Guernsey girls who petulantly stand with hands over the net for the usual handshake while the Jersey party is beginning and they are ignored.

Athletics?  Strangely – because it’s my sport – I don’t recall athletics for its drama.  I’d like to have been there in Melbourne in 1956 to see Ronnie Delany

come from the back of the field to win the 1500m gold.  Kelly Holmes’ double gold.  Cathy Freeman’s run on Magic Monday.