I don’t quite go back as far as 1935, the year in which the Ripping Yarn entitled Golden Gordon and starring Michael Palin was set.  This was the classic, humorous portrayal of a working man whose passion in life was his local football team.  I don’t even go as far back as the immediate post-war years when football terraces the length and breadth of England were regularly packed to the gunwales with cloth-cap wearing blokes, smoking to a man, and wooden rattle – waving lads with scarves in the local team’s colours.  The men would work a 5 1/2 day week, knocking off on a Saturday lunchtime.  Into the pub for a few pints and then down to the match for a 3pm kick off.  The result of the match would decide whether or not the wife got a kiss or a row later and the kids a bag of sweets or a kick up the arse.  In those days of few and simple diversions the good or bad vibes created by watching sport could be mind-altering. 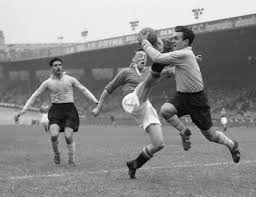 But if those days are gone, replaced by many more modern and varied interests, the result of our technological and social advances, the primeval feelings refuse to die.  If I’ve virtually forgotten that I come from Birmingham, not Jersey or Ireland, I was reminded by my psyche over the weekend.  On Friday evening England’s rugby team dealt with the furious and history-driven charge of Wales and got away from Cardiff with a rare win.  On Saturday the rugby team representing my adopted country, Ireland, nicked a narrow win in Rome.  Finally on Sunday Birmingham City nabbed a precious three points in their fight against relegation.  It’s nearly 50 years since I first watched them play and I still can’t let go.

No wonder I have a sort of warm, fuzzy feeling today.