A pretty rubbish turnout for what used to be a popular little run.  Don’t know why really – the roads were clear, unlike in the rest of the British Isles.  Maybe scheduling it on the last Saturday before Christmas wasn’t great planning, but you’ll never please everyone with date fixes.

I thought it was going to be me v Sue Le Ruez until a few more runners dribbled up, most of them called Raimbault or Maher.  You check in at the car park at the top of the hill then jog down to the start at the far end of the harbour.  Having done the check-in the officials (Carl & Lynn Prosser, what a great job they do) drive down, start the race, then zoom back up the hill to do the timekeeping and recording.  It brought back memories of Betty McGough who did this for more years than anyone can remember before passing away earlier this year. 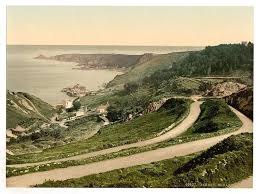 The hill is a mile long, rising maybe 300 feet.  It’s more usually used for car and bike time trials but this is a good opportunity to test human engines.  There might have been 15 of us in the end including several of the Club’s young runners – a great opportunity for everyone to compete together.  After the first flat bit the hill kicks in by the Black Dog.  It’s a shock to the system and mentally it’s not a good idea to think about what is to follow.  For a minute or so I thought I might give Sue, Judith and Lyndon a race but soon the natural order was restored and they started to slowly pull away.  So it’s just head down and concentrate on working hard into the climb, aiming for the next bend.  But what was this, a young Maher just ahead!  Adele is so young she probably only started walking last week or something but here she is puffing gallantly after her parents and brother.  The easy thing would have been to pick her up and throw her into the bushes, but instead I rely on my legs, which are four times longer than hers, to forge a little lead.  She doesn’t give up though and I’m forced to continue to work as hard as I can.

Unusually I’m struggling for breath – it’s normally my legs that give out first.  But the truth is too much of my running is done at an easy pace and this is a proper test of fitness.  Around the last steep bend and there’s Lyndon within striking distance.  I momentarily pick up the pace but realise he’s too strong for me once again and I content myself with finishing ahead of Adele and one more non-regular runner.