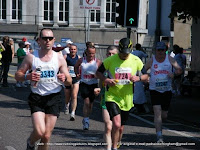 Gorblimey, thank goodness for sunscreen and peaked caps. For one day a year Cork City gets blessed with Mediterranean weather. The trouble is it’s always on Marathon Monday. There was significant carnage yesterday amongst the full marathoners. Those that managed to complete the full 26.2 have my total awe and respect. The state of many of them who crossed the finish line left no doubt as to how difficult the conditions were. Many others sensibly dropped out rather than risk serious damage whilst dozens of others required medical attention.

My previous ill-fated attempts at the Cork Marathon were in similar (maybe not quite so warm) temperatures and I’m beginning to think now that this was more of a factor than I previously had thought.

But this year it was happily just the 5.9 miles for me – from the quays in town out to the final relay handover at Model Farm Road. I walked that section of the course the day before. This proved to be a good move as I realised it is in fact a tough-ish little run that I ought not to be taking lightly.

I was guesting for Boards AC, an offshoot of the internet forum http://www.boards.ie – specifically the athletics/running/triathlon sub-section. We had two teams, mine being the slower B team. It was fun putting some faces to nicknames over a pint in Dan Lowrey’s the night before!

On race morning I was up early to meet our second leg runner blind_hurler who had driven down from Waterford that morning, to hand him his race numbers etc. Then back for the 9am start in St Patrick’s Street, by which time it was already getting warm. A minor panic when my lead-off runner Funkyzeit rang to say ‘it is a 9.30 start isn’t it?’. But he not only made the start but ran a stormer to bring Boards B to the first handover ahead of our elite colleagues. Meanwhile I made the short journey over to where I would pick up the wristband as the race came back to town. There we were able to greet the leaders as they came through. A clean handover saw me set off around the quays and out along the South Ring before turning off across the roadbridge to Turners Cross. Already it was becoming a battle – I’m not running at all well plus the sunblock was running into my eyes making things decidely uncomfortable. But there is no option, especially in a team situation, but to battle on as best one can. Beyond the Cork City FC ground the route hangs a couple of rights into quiet suburban roads, through Ballyphehane and down to the Lough. I started enjoying myself a bit – my eyes had cleared, my running had settled a little and the crowd support aroung the Lough (and indeed beyond) was superb. Loads of applause, high fives from the little ones, sponges (I forgot I had glasses on so they got a wash at my first go with a sponge), garden hoses played onto the runners. Out onto the Wilton Road and left onto Model Farm Road for a final mile to where I found my teammate Rainbow Kirby. RK has (I learnt the previous evening) dropped her weight from 15st to 11st in her first year of running – astonishing. And after my moderate 53 mins she was to bring us home in a shade outside our stretch target of 3.40. (The A team were a touch outside their 3-hour target).

At this point, 19 miles into the race, there were many runners struggling big-time. And as the shuttle bus dropped us back into town (previous thoughts of jogging back in having been abandoned) there were still many just starting into the second half of the race, destined to suffer for several hours yet.

But for Boards AC it was a cool drink in Scott’s and later, for me, a great Indian at the Eastern Tandoori with my good mate Deirdre.

The photos show me in the early stages of my run (in the background to the right), and Robinph in his Boards AC singlet who now has some explaining to do.