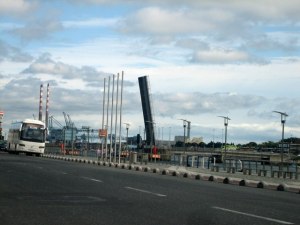 After a couple of rainy, windy days it was a warm and still Sunday morning. So pleasant was it, and so easy was I feeling, that I added a couple of miles to my planned 10-miler. That took me beyond Blackrock village for the first time in a while. After an easy outrun I determined to wind it up a little on the return trip – use my arms, pick up my heels a little more. But after eight miles I flagged somewhat and contented myself with a quiet trot home on what was now a pretty warm day.

I’ve always enjoyed running in warm conditions and indeed Jersey provided plenty of opportunities. Nevertheless I find that I rarely run well. It may or may not be coincidence that my abject failures in the 2007 and 2008 Cork Marathons were under pretty warm conditions. Once again I wonder if my hydration policy is a factor. It may be all very well drinking during a run/race but is the damage done well before that point? Today my only hydration in the preceding 15 hours was a bottle of wine and a cup of coffee.
One of the advantages of being a plodder is that you can take in your surroundings rather better. I have no difficulty in stopping to take a breather either, and early in the run this morning I had the opportunity to observe, for the first time, the East Link bridge raised to allow a piddly little yacht to pass underneath thus holding up traffic and runners alike. An awesome sight close-up and all controlled by a man in a hut. Just as my son once set his heart on becoming a Stop-Go man who controls traffic, I want to be the man who’s job it is to push the button to raise the East Link.
A little further on I ran closer to the river than I normally do, to observe the boats in the so-called marina. If that’s what Dublin’s marina amounts to well it’s a sorry effort. Surely there must be more than that? It would fit into a corner of any of the marinas in St Helier or St Peter Port, though admittedly the floating palaces there rarely do anything as vulgar as go anywhere.
So 12 miles in a couple of hours today, 25 on the week and 385.4 for the year to date. And approximately 1,200 miles in my present Asics Gel Cumulus. Which are showing interesting wear patterns, principally on the heel area, to my chagrin. But they remain serviceable and I’ve yet to manifest any symptoms of injuries that the doomsayers predict. The experiment continues and my box-fresh runners remain, ermm, box-fresh.